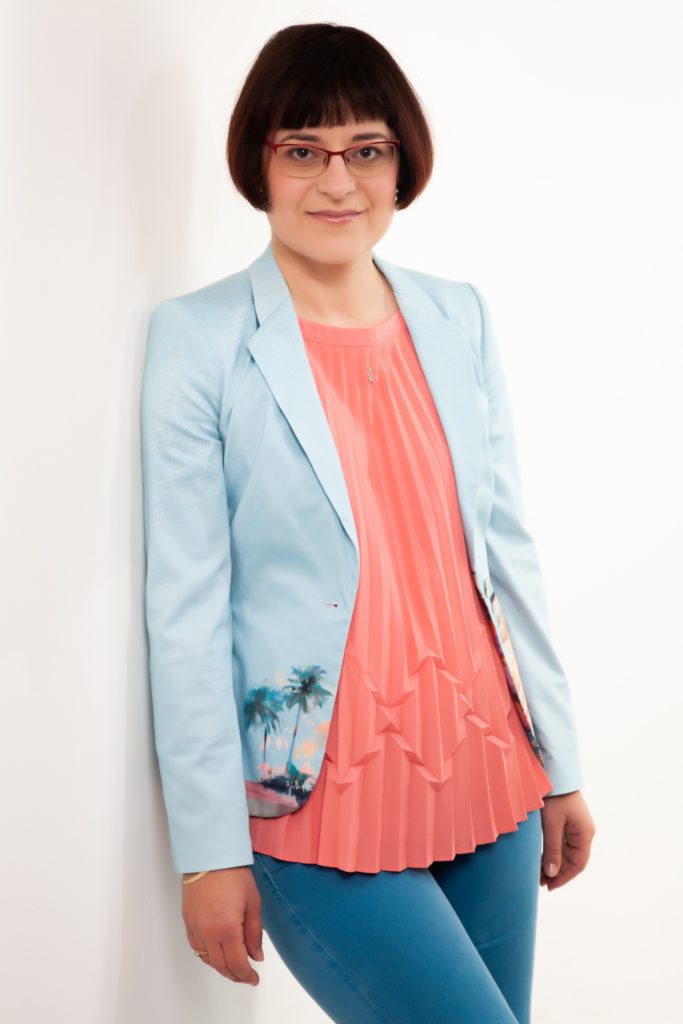 As a top graduate of the Faculty of Mathematics & Computer Science at Transilvania University of Brașov, as well as of the Faculty of Automation at the Polytechnic University of Bucharest, an engineer and teacher at the same time, Luiza embraced computer programming as a profession. For the last twenty years she has worked as an analyst and developer of database solutions. Appreciated as an exceptional mathematician with numerous prizes at local and national mathematics and physics competitions, Luiza’s passion still remains the art, as she is an avid painter. Graduating from the popular art school (8 years) at the painting and piano class in her hometown of Tulcea, art was a constant passion for Luiza. Her numerous paintings in various mediums were appreciated in all the exhibitions organized on different occasions as well as at the national painting competition where Luiza won an award.

As mentioned above, Luiza was born in the city of Tulcea in Romania, very close to the wonderful Danube Delta. Raised by the grandparents from her mother’s side up to the age of 7, Luiza gains an intense spiritual knowledge as a child. Born under the sign of Cancer Luiza is also endowed with an unusual intuition and a deep religiousness. As a child, she feels the presence of her guardian angel and does not shy away from listening to what he reveals to her. Her grandparents do not oppose this talent but encourage her spiritual path.

With the beginning of the school, Luiza comes out of the influence of grandparents which she regrets and come under the influence of parents, who do not understand the high spirituality of their daughter. Luiza is instructed to focus on mathematics, science and chess and soon become an eminent student. She wins numerous prizes at chess and the mathematics Olympics being the best in school. Being passionate about drawing, she enrolled as a child at the Popular School of Arts, studying painting and piano. After finishing high school, at the urging of parents who did not see her as an artist, Luiza decided to study mathematics in parallel with engineering and graduated from both faculties, starting to work as a computer programmer. The painting somehow remains in the background, as does the spirituality that throughout her life as an undergraduate and student brought her only dissatisfaction. Being in constant contact with the guardian angel Luiza was telling the truth as many times as possible and this caused her many problems in her teens. At the same time, the parents’ refusal to see her as an artist has often brought her to the brink of hopelessness and unhappiness. Considering herself alone and somehow deserted by everyone she decides to leave the country almost immediately after finishing university to work in another environment, maybe more permissive. After two years of living and working in Cyprus, Luiza, in consultation with her guardian angel, learns that London is the ideal place for a spiritual and especially an artistic breakthrough. At the same time she starts to practice closely the ten commandments.

Moving to London, Luiza is not able to capitalize professionally on her knowledge and so with two university degrees she gets to work in various hospitality units, in jobs that require a lower qualification. She starts to paint in the meantime but only a bit, the work schedule being very busy. She finally manages to find a job based on her qualifications, but her artistic application still remains just wish.

She decided to attend a spiritual workshop in order to find a way to promote her art and to paint more. That’s where she meets Romeo. He encourages her to make order in her life and creation by introducing crystals with their energy into this new equation. Romeo also encourages her to complete her qualifications to become a Reiki Master, qualifications started in Cyprus and also to organize her first painting exhibition.

Gradually, through many hours of meditation, Luiza’s life changes, becoming more and more spiritually rich. She soon decides to have a workshop together with Romeo in order to promote alternative therapies, human bioenergetics, crystals, and not least the angelic entities. Luiza being Angelic Reiki master and artist, comes with the idea of introducing in the workshop mandalas created by participants as a form of Power art. Thus is born the Power Mandala, a new form of alternative therapy in which an abstract painting with floral aspect drawn by the participants, based on numerology and the chromatic resonance of their own bioenergy, can bring about the improvement of an affection or the fulfillment of a purpose set as an intention.

Romeo comes in this new form of energy therapy with crystals chosen and arranged in a vortex mandala that supports the process of creating individual mandalas. In creating this mandala Romeo uses for the first time in addition to the numerous crystals from his collection, the 44 healing cards from „Crystal Oversoul Attunements” collection and then the 22 healing cards from „Crystal Oversoul New Earth Attunements” collection, created by his teacher and mentor Michael Eastwood. These cards representing different crystals are arranged in different forms to supplement the energy of the existing physical crystals and to facilitate the connection with the „soul” entities of the crystals (oversouls).  At the same time, through his knowledge of numerology and visualization of the aura, Romeo advises the participants towards the best choice of the shapes and colours used. Together with Luiza, he brings in the space of the workshop the Archangels and other angelic entities in order to facilitate the creation of personal mandalas. The workshop was held monthly for seven years, ending with an anniversary event. In addition to the workshop Luiza performed numerous Reiki healing sessions with very good results.

On the artistic plane Luiza became a very prolific artist. In addition to the many sketches and watercolors, Luiza began painting mandalas in her own style. Thus she painted the mandala of Romania, which was purchased by a British family but sent in printed form to the President of Romania Mr. Klaus Iohannis as well as the Ambassador of Romania in London Mr. Dan Mihalache, who in return sent letters of thanks and appreciation. She also created mandalas for the great poet Mihai Eminescu and our great storyteller Ion Creanga. They were sent to their museums and memorial houses. She also created mandalas for other great artists poets and writers.

She created mandalas for the months of the year (which can be seen on this site) and many more. Almost all of Luiza’s artistic creation can be admired on the artist’s website www.luizavarovici.co.uk/portfolio.  Luiza has also organized numerous painting exhibitions in Bristol. In the future she wants to organize an exhibition in Romania to captivate the art loving public with her paintings.

Being increasingly attracted to working with Romeo on crystal healing, over the past two years both have specialized in a new form of crystal and sound therapy called Crystal Sound Activation. Organized under the aegis of Crystal Sound Academy, Luiza and Romeo graduated both courses (basic and advanced level) and specialized in sound and crystal therapy alike.

Currently, besides healing with crystals, Luiza is working on a joint project with Romeo – a set of 49 playing cards with intuitive mandalas drawn by Luiza and an accompanying guide book written by Romeo, made in order to offer those interested an alternative to Power Mandala – A new way to use mandalas in everyday life.